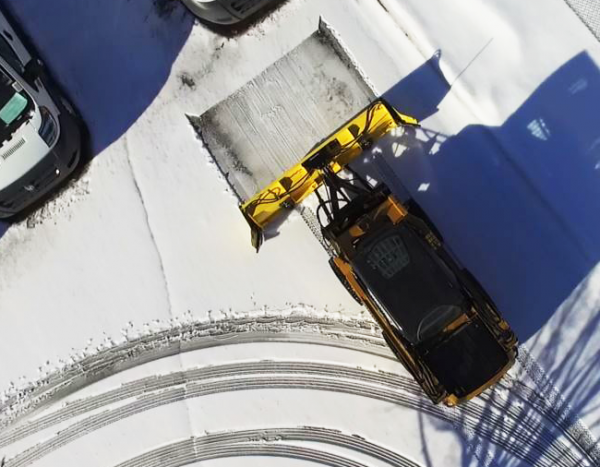 What’s the standard for profitability in snow removal? Efficiency, or clearing more snow faster with less manpower and equipment.
‍

And what’s the standard for efficiency? Hint:
‍

The new standard for efficiency is “cutting-edge downtime,” thanks to technological advances in snow removal attachments and machines. It refers to the amount of time your cutting edge is on the surface being plowed in relation to the total time required to complete a job.
‍

The greater your cutting-edge downtime, the faster you get jobs done and the more money you make.
‍

Edge down, profit up. It’s really that simple.
‍

The opposite of cutting-edge downtime is cutting-edge uptime, which refers to any time your cutting edge is not on the surface moving snow. It’s all nonproductive time.
‍

You get cutting-edge uptime when you lift your snow pusher, a.k.a. box pusher, off the ground to back up for another pass, to chase after and clean up trickles of snow that came off during earlier passes or to travel to the other side of a lot.
‍

Let’s say a job takes your operator two hours with a box pusher. During that time, his cutting edge is only on the surface for one hour; the cutting-edge downtime is only 50 percent. That’s fairly typical for clearing a lot with a snow pusher because of time spent backing up and chasing trickles.
‍

In this example, for every two hours your operator is working he’s actually only moving snow for one hour.
‍

Edge up, profit down.
‍

The New Standard in Snow Removal

The box pusher was invented more than 25 years ago. It revolutionized the snow removal industry at the time due to its capacity for containing and carrying snow; operators could clear more than with a standard or snow bucket.
‍

Over the years, this has led to what has become the greatest misconception in our industry.
‍

Just because you can contain more snow with a box pusher compared to any other attachment, that no longer means using a box pusher is the most efficient way to clear snow.
‍

We all understand one pass doesn’t equate to efficiency on an entire job.
‍

Box pushers can’t angle or windrow. At the end of every pass, the operator has to lift the box (and the cutting edge) off of the ground, all the way to where he started the previous pass, lower the box and commence the next pass. Over and over. And somewhere in there he has to go back and clean up snow trickles.
‍

All of that is nonproductive, cutting-edge uptime; no snow is being moved.
‍

Now, for the first time in more than a quarter of a century, technology has given us a more efficient, and therefore profitable, tool for clearing snow: the AutoWing plow.
‍

An AutoWing is a straight plow with wings that move automatically depending on which way the blade is angled. Whether it’s on a small skid steer or a huge loader, an operator with an AutoWing plow can angle the blade and windrow every pass. When he reaches the end, he simply turns the machine around and heads back the way he came, angling the blade the opposite way and moving snow all the way. Because the AutoWing plow angles and has a wing on the leading edge, trickles off the wrong side of the plow are greatly reduced, if not eliminated altogether.
‍

The snow pusher has served us well for a long time, but its time is past. The time for AutoWing plows as our primary tool has come.
‍

Box – Make a pass. Lift the attachment off the ground. Back up. Align the machine. Make another pass. Back up again. Catch trickles. Back up again. Repeat. Over and over, moving snow about 50 percent of the time.
‍

AutoWing – Make a pass. Turn the machine around. Make a pass in the opposite direction. Repeat. Over and over, moving snow 75-90 percent of the time.
‍

What’s that really mean? Take the example we started with:
‍

At 75 percent cutting-edge downtime, you gain 30 minutes of productive time for every two hours in an eight-hour shift. That’s two additional hours, plenty of time to add another job to the operator’s shift. Or you can send your hourly paid operator home two hours early.
‍

At 90 percent cutting-edge downtime, you gain about three-and-a-half hours.
‍

Whatever the gain in your cutting-edge downtime is, and whether you put it toward extra jobs or cutting overhead, there’s more money on the black side of your ledger.
‍

A 16-foot box pusher has a carrying capacity of around 21 yards. You can get it in different brands or colors and with different types sideplates or unique floating sections. You can even upgrade certain elements, like moving from a rubber to a steel cutting edge.
‍

Unfortunately, doing so will increase your carrying capacity –  the amount of snow a box pusher can move in one pass – by exactly zero.
‍

At the end of the day, it’s just a box. All it can do is push the same amount of snow forward.
‍

Snow Removal in the Age of More

An AutoWing plow does so much more. Four times more, in fact, which gets to the “less manpower and equipment” portion of our efficiency equation.
‍

With an AutoWing, you can push snow, angle plow with wings, wide-angle plow and backdrag.
‍

You can do all of those things with one guy, one machine and one attachment. You don’t need a second operator on a jobsite with a second piece of machinery and a second attachment to get into hard-to-reach areas or backdrag snow from garage doors, dock doors, parking stalls and more.
‍

Maximizing cutting-edge downtime will improve your efficiency and profitability on every kind of job, not just specific lots or for specific applications.
‍

That makes now the perfect time to step back and rethink the way we approach snow removal jobs of all kinds.
‍

And why wouldn’t we? Think about it.
‍

Twenty-five years ago we didn’t have mobile phones on our jobsites and we weren’t using GPS tracking. We were still using sand.
‍

Now, thanks to advances in technology, we have sophisticated mixes and types of salt, liquids and brines. We regularly use GPS and everyone on the jobsite has a cell phone.
‍

Yet we’re still accepting the snow pusher as the best tool for moving snow. Why?
‍

Profitability in snow removal isn’t about one-pass containment capacity anymore, but how much time your cutting edge is on the surface moving snow.
‍

So do we keep thinking the way we did a quarter of a century ago, or do we change our approach to take advantage of the latest innovations?
‍

Edge down, profit up. It really is that simple.