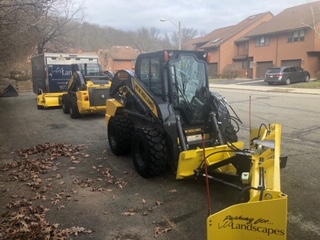 Snow removal is a numbers game for Lou Caggiano and his company, LCC Landscapes out of Fairfield, N.J.
‍

It’s all about hitting equilibrium among the components of the efficiency equation – people, equipment and time – to get the job done, do it right the first time and finish as quickly as possible.
‍

Find that sweet spot, and the result is a stronger bottom line.
‍

Last year, with the addition of a new piece of equipment, Caggiano thinks he’s nailed it.
‍

Caggiano and his father, Lou Sr., are the father-son team that represent the third and fourth generations of the family that has been landscaping  and moving snow in the Fairfield area for more than a century.
‍

Caggiano’s grandfather on his mother’s side started the business in a horse stable because at the time much of the work was powered by horse-drawn equipment. Later, in the 1920s, the business began plowing snow for the city in the 1920s, bolting wood to the tracks of motorized machines to avoid scraping up the city streets.
‍

These days, LCC employs about 17 people during the spring, summer and fall landscaping months. They’re split into three crews that do everything from landscape design installations and plantings to irrigation and leaf removal.
‍

“If you’re in the landscaping business, you have to be in the snow removal business, too,” Caggiano said. “That’s just how you make it work.”
‍

Caggiano says the condo sites are the most complicated and time consuming.
‍

Prior to the 2017-18 season, LCC crews included a guy operating a skid steer with a bucket attachment moving snow away from the garage doors and several guys with shovels clearing up trickles or whatever else the bucket missed. Another operator with a box pusher moved the snow from the center to the approved area.
‍

It worked fairly well, but the guys with shovels were always waiting on the machines. That was time wasted.
‍

Caggiano had seen the QuattroPlow in ads and on social media, he said, and thought, “You know, this is something that could really help us.”
‍

In addition to the potential time savings, he liked the fact that the QuattroPlow’s wings move all the way back – something that isn’t available on other attachments – and there’s no need for an electrical hook-up.
‍

“This is a much better built attachment than many of the others we’d seen, and it was less expensive,” Caggiano said.
‍

LCC bought two QuattroPlows for 2017-18, one for each of the condo sites, and the results have more than justified the purchase.

"The biggest question is always, 'Is this equipment really saving you time. I'll guarantee you that anybody you ask, their QuattroPlow is saving them time, hands down."
‍
Lou Caggiano

The QuattroPlow cuts the crew’s time down by about a third, which, in turn, cuts manhours by about a third. In other words, one crew plus one attachment equals one-third of the time, which in turn equals more profit.

That’s math Caggiano can get behind.

Based on those numbers, he plans to purchase a third QuattroPlow prior to next season.