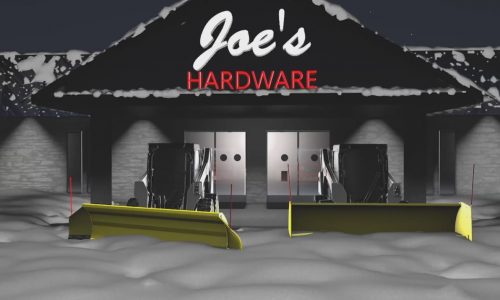 Snow Pusher or Angle Plow? How to Choose.

Angle plow vs. snow pusher. There’s a long-standing debate among experienced plowmen about which is best, especially when it comes to plowing large, open lots. Snow pushers contain more but can’t angle or backdrag, and typically you only plow in one direction – toward the pile. Angle plows have limited containment, and, like snow pushers, leave windrows when they overload.
‍

Let’s look at some pros and cons of each in the context of efficiency and reliability.
‍

Choose a snow pusher when…

Choose an angle plow when…

Angle plows have obvious advantages over snow pushers when you look at the efficiency of the two products side by side. Even so, many contractors opt for a snow pusher in situations where an angle plow would be superior.
‍

In many or most cases, skid steer, backhoe or wheel loader operators with angle plows will majorly outperform snow pushers efficiency-wise. In many years of studying this market, we’ve found contractors often hold the misperception that snow pushers are more efficient because they push large “piles” of snow. Often overlooked, however, is the amount of time operators waste going in reverse or cleaning up windrows. And that’s not even to mention the poor scraping ability that forces operators to take multiple passes to clean the same area.
‍

It’s often said that these are the six most expensive words in the English language. So next time you’re selecting a snow removal tool, make sure you question the status quo, consider the pros and cons and think hard about how well your machines are paying you back. With constant downward pressure on contract pricing, taking some extra time to consider the ROI of your snow removal tools could add handsomely to your bottom line.
‍