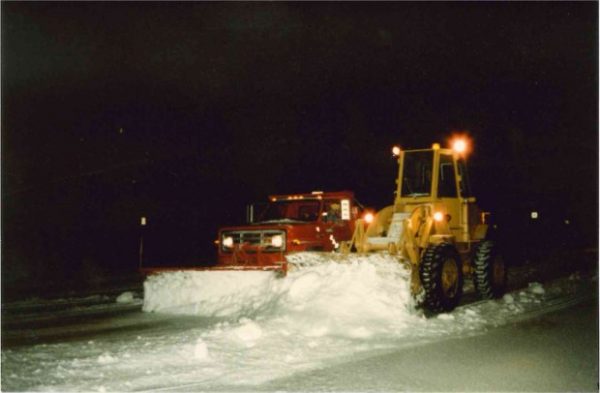 Need to Solution Through the Years

Firsts. When we take a look back at SnowWolf’s nearly 25-year history of snow removal equipment manufacturing, there have been a bunch of them.
‍

Every blade, attachment or accessory we’ve released has either been a first for the industry or has incorporated advancements that improved efficiency of existing equipment and profitability for snow removal contractors.
‍

SnowWolf continues to plow ahead this month by unveiling what we think are our most amazing, efficiency-enhancing snow removal products yet at the 19th annual Snow & Ice Symposium in Providence, R.I. And like all great inventions, they’re going to make what came before obsolete.
‍

It’s an exciting time for our family business, certainly, but it’s also a great time to be a snow removal contractor or equipment dealer. Why? Because these future-shaping attachments are going to boost your business.
‍

We often talk about SnowWolf as an innovation-driven snow removal equipment company. But with each passing year, where we’ve come from seems to fade a little bit more.
‍

That’s OK. You don’t need to know we introduced tight moldboard curvature to skid steer snowplows to grasp how valuable WolfPaws can be to your business. For a lot of people – myself included – infinitely more important than what SnowWolf did in ’92 or ’02 or ’07 is “what have you done for me lately?”
‍

What SnowWolf did lately, at every stage, was address a customer need. We’ve understood from the beginning that our success depends on providing valuable, time- and money-saving solutions to real problems that snow contractors encounter on the job.
‍

It started even before my dad, Jerry Holman, launched SnowWolf in 1992. Before that, he ran a landscaping, lawn care and snow removal contracting business. During those years, he developed extensive industry knowledge and snow removal equipment savvy. Insights from those days are still informing equipment development at SnowWolf today.
‍

We learned about the importance of blade curvature early on with our first and only product at the time, the UltraPlow.

With a snowplow you’re looking for several attributes in addition to scraping well and plowing efficiency. Right at the top of the list are getting more width of clearance with the same amount of horsepower and less fuel. You do that by “making the snow live.”
‍

With tight curvature, snow moves from the cutting edge and up the moldboard, then it curls and begins to roll. It looks like a big white log rolling in front of your machine that gets bigger and bigger in the center and tapers to the edges.
‍

Compare that to a blade that’s not optimized. When an operator starts moving forward, the snow doesn’t do anything but build up in front of the plow. It’s static. It’s “dead.” And it takes a lot of HP and fuel to move dead weight.
‍

We weren’t the first to apply full curvature optimization to a snowplow, but we were the first to incorporate it into a skid steer blade. The UltraPlow, and the blade of every SnowWolf plow and pusher since, incorporates aggressive curvature to allow snow to roll dynamically.
‍

Another advancement was the ability to angle the UltraPlow as much as 35 degrees. The industry standard is 25-30 degrees.
‍

The fastest a skid steer will go is 12.5 mph. By comparison, a pickup can plow much faster, up to 25 mph. However, with a 25-degree angle, snow quickly begins to trickle off the blade and forms a windrow that keeps getting bigger. Meanwhile, the snow gets deeper in front of the plow, and the operator has to reduce his bite. The speed advantage disappears. A skid steer with a blade angled at 35 degrees can take larger bites for longer stretches without windrows than the pickup with a blade angled at 25 degrees. The skid steer clears the same area as fast or faster and with less horsepower and fuel consumption.
‍

With these two innovations, contractors were able to use wider plows with the same skid steers and cut time off of every job. Still can.
‍

An angle plow with wings is the most efficient attachment for a skid steer in most applications, by far, but snowpushers will always have their place.
‍

Let’s say you have to plow a mini-storage with two, 300-foot-long buildings full of garage doors and 40 feet of driveway between them. The snow needs to be angled away from the doors to the center of the driveway, then moved 300 feet plus, to the far end of the complex.
‍

An angle plow will be best for moving the snow away from the garage doors, but will only push 10 feet or so before the snow starts trickling off of the wrong end of the blade. So you’ll have to go back and clean up the windrow. One windrow will become two, two will become four, and pretty soon you’ll be back in front of the garage doors again.
‍

Depending on the widths of both, a snowpusher’s capacity is 10 cubic yards per push and an angle plow’s is 2. It’s easy to see that, with a box pusher, you can move all that snow in just a few passes and just a few minutes.
‍

With that in mind, we introduced MegaBite sideplates in 2000 that fit on the UltraPlow to form a box pusher.
‍

They did the job but came with some issues. Initial installation was difficult so dealers didn’t want to mess with them, and they were heavy and cumbersome for operators in the field. They also required a large cross brace that caused buildup in the box.
‍

So we asked ourselves, how do we make this better? Our customers need both an angle plow and a snow pusher for many jobs, but they’re leaving the MegaBites on all the time.
‍

We introduced WolfWings in 2002. With WolfWings on one of our Ultra or Alpha plows, an operator will be up to 50 percent more productive when angle plowing.

Instead of only taking half a blade pass to avoid trickling off of the wrong side of the plow while angle plowing, you can take a full bite every time. You also can carry three times more snow into a pile in a straight push than with an angle plow and no wings.

They’re easy to remove, too; just pull two pins per side. Takes less than than 30 seconds.

As we developed WolfWings, one of the considerations was how to attach them to our UltraPlow, which by that time came in five widths.
‍

The result was a universal connection system for SnowWolf products. It comprises two heavy-duty receivers that are built into the ends of the blades in a way that allows them to handle the forces applied by our attachments.

At the time, the system accommodated WolfWings; easy on, easy off and they worked with any UltraPlows. Today the system provides ultimate flexibility for using all of our attachments with Ultra or Alpha series plows or snowpushers.

SnowWolf is the only manufacturer that has invented and adopted a universal connection system, and it’s been a huge benefit for our dealers and end users alike.

Say you’re a dealer and you have a set of WolfWings. You can attach them to any width of UltraPlow or AlphaPlow on your lot to meet a customer’s needs.

How about an end user running multiple SnowWolf blades? Right now, today, you can attach either WolfWings or a FastTach in the same accessory receptacles on any of our plows. That allows you to allocate your attachments to maximize efficiency and capacity for your entire operation without purchasing extra plows or pushers.

The latest SnowWolf advancements, coming next week, work with the same system.

Looking back, the story behind the creation of WolfPaws is amusing. Took a while for the humor to take hold, though.

SnowWolf had innovated its way into a corner, so to speak. We continued to extend the widths of our plows, and WolfWings added even more capacity. That meant more weight. More weight required either more horsepower and fuel consumption (no, thanks) or better tire traction.

First, we tried chains. What a mistake.

It was the worst ride any of us had experienced in a skid steer. Ever. The cab was like a bad carnival ride with tooth-jarring, repetitive, rat-a-tat jolts that shook the smarts right out of you. Ever watched kids on a Slip-N-Slide in the summer? Yeah, it was like that, but on ice.

Rattling we could stomach if it meant better performance from the skid steer. It didn’t. Chains simply do not work on ice, and in snow removal there’s always ice, or at least hard-packed snow.

Something else, too. Skid steers are designed to skid or scrape when they turn. Thus the name. Tire chains are not designed for that kind of abuse. We shredded a set of chains in less than eight hours.

Back to the drawing board. The head scratcher was that trucks could manage wider plows without sacrificing traction….

Pickups are not equipped with 12-inch mud tires like those on skid steers. They ride on narrower tires. Even though the tires are on a bigger, heavier machine, less tire area is on the surface at any given time.

So there we were, sitting on a nifty universal connection system that didn’t work with our MegaBites. We also had customers who needed both angle plows and box pushers but didn’t want the hassle of disconnecting and reconnecting MegaBites all the time.

Enter FastTach, the ultimate quick-release box pusher attachment for a skid steer. It handled the same functions as MegaBite sideplates, but operators could attach and detach it in five seconds without getting out of their machines. Angle plow, backdrag, connect your FastTach, push, pile, repeat, drop the FastTach and move on to the next job.

Pushing Forward. And Backward. And At An Angle.

In each one of these cases, need drove innovation. Our customers were frustrated from using a product that didn’t work the way they wanted it to, or it wasn’t as fast or as smooth or as easy as they expected, and they told us about it.

Always coming up with something cool or always being first is nice, but for SnowWolf, it’s never been about that. It’s about making the lives of snow removal operators easier, safer and more efficient. After all, we’ve ridden a few miles in your cabs.

Next week, at the SIMA show our line of snowplow, snowpusher and snow removal accessory innovations gets longer. If you can’t be there, Follow or Like SnowWolf to get in on the big announcement of 4X THE PLOW and an attachment that’ll help you Gain a Biting Edge.