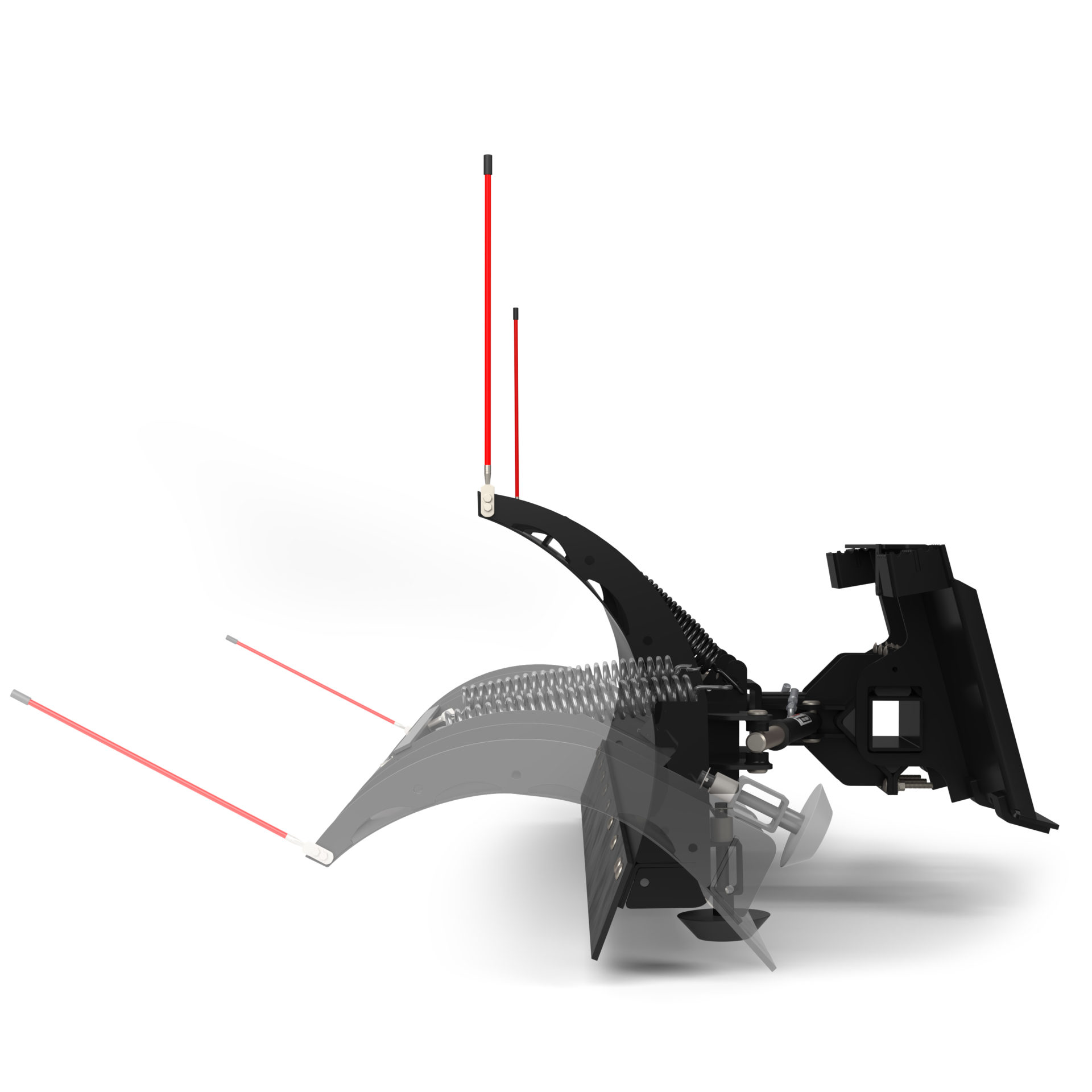 The versatility of the Burnsville, Minn.-based company’s new attachment is made possible by a semi-floating torsion system that provides infinitely variable down pressure and shock absorption, a trip-lock-out feature and a shorter blade-to-machine distance for greater maneuverability. The FlexPlow also features automatic oscillation, which is an improvement over the previous design. It allows the attachment to rise or fall up to 5 inches on either end so the plow follows the contours of the surface being plowed and scrapes it clean.
‍

In addition, SnowWolf resized the blade to make the FlexPlow ideal for smaller skid steers and compact tractors. The attachment is designed for use with machines that weigh up to 8,000 pounds, and it is available in 5-foot, 6-foot, 7-foot and 8-foot lengths.
‍

Holman said that nothing like the FlexPlow’s patent-pending torsion system has ever been used before in snow removal attachments.
‍

The torsion system also flexes to provide cushioning in the event of an obstacle strike while plowing snow or moving other material.
‍

Finally, the system provides built-in shock absorption when traveling between projects. Rather than bouncing metal to metal on a solid or chain lift mechanism, which are common in other attachments, the FlexPlow’s weight rests on the torsion system. If an operator hits a pothole, for example, the plow will be cushioned and bounce slightly rather than delivering a jolt to the operator and machine.
‍

A plow’s trip feature is essential when plowing snow because there are often obstacles hidden under the snow. The trip edge protects the operator and the machine by minimizing or completely alleviating the force the jolt. However, when moving dirt or other materials, the trip function can hinder the plow’s efficiency or even make it impossible to complete the job because the blade will trip every time it encounters an obstacle or there is too much weight from material in front of the plow.
‍

The redesigned FlexPlow allows an operator to lock the trip mechanism simply by adding two bolts between the blade and the quadrant interface. Holman said the re-design came in response to suggestions from customers in southern areas of the United States.
‍

“It only snows three times a year at best in some of those states,” he said. “People wanted to use the FlexPlow at other times for filling in holes on gravel driveways, spreading black dirt or grading, but that wasn’t possible because the blade tripped all the time. We fixed that with stronger implements and the trip-lock-out system.”
‍

The new FlexPlow also allows the operator to adjust the tension on the trip mechanism. It comes standard with two springs, and customers can request two additional springs. This gives the operator three options – zero trip with the lock-out system, easy-full trip with the two-spring configuration and medium-full trip with four springs. When an operator encounters an obstacle in either of the full-trip modes, the entire blade tips forward and engages the extension springs between the quadrant and the moldboard. After the obstacle has been cleared, the springs return the blade to its normal position.”
‍

Many compact tractors have mounting plates that are far away from the front of the tires, as much as 3 feet in some cases. When a long attachment is added to the front, it adds tension to the machine’s components and affects the tractor’s maneuverability.
‍

SnowWolf designed the new FlexPlow with compact tractors in mind by shortening the distance from the cutting edge to the back of the attachment, making it 9-1/4 inches shorter than the previous version. The adjustment makes for a tighter turn radius, provides better overall maneuverability and reduces stress on the tractor’s components.
‍

SnowWolf also reduced the height of the blade by 2-1/2 inches, from 30 inches tall to 27-1/2 inches. Holman said the new FlexPlow is “better sized” for small skid steers and compact tractors and it’s easier for an operator to see over the top. “It’s a bit more compact, but it hasn’t lost any strength compared to the previous design,” he said.
‍

The FlexPlow also incorporates many standard SnowWolf plow features. For example, the moldboard has an aggressive curvature to enable “live” snow rolling for exceptional efficiency, and the plow angles 35 degrees, which is more than the standard 25- to 30-degree angle of other plows. The combination of the optimized curvature and greater angling enhance performance so an operator can plow snow much faster with less trail off on the leading edge of the blade when angle plowing.
‍

The FlexPlow is backed by a two-year warranty.
‍