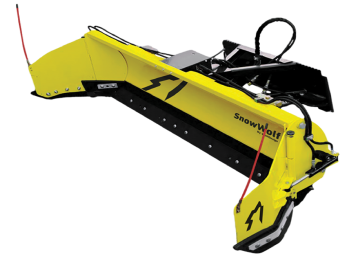 BURNSVILLE, Minn. (June 23, 2016) – The QuattroPlow, a revolutionary new snowplow engineered and manufactured by SnowWolf, gives operators the power to efficiently tackle four distinct functions with one piece of equipment. They can do it without leaving the cab, and no extra electric harnesses or controllers are required in the machine. They can also set the plow for a fifth function in 60 seconds or less by leaving the cab to reposition the wing cylinders.
‍

SnowWolf Director and General Manager Mark Holman said the QuattroPlow saves snow removal contractors time and effort because they do not need to connect or remove attachments between functions. That, in turn, results in greater profit potential, he said
‍

“Operators can move more snow to the right places in the same time or less with a QuattroPlow,” Holman said. “This four-in-one equipment delivers greater capacity, efficiency, flexibility and maneuverability in everything from tight driveways to massive parking lots. It’s simply four times the plow or pusher of anything out there right now.”
‍

The QuattroPlow’s wings rotate 165 degrees to make it a high-capacity hydraulic snowpusher when they are all the way forward, and when they’re all the way back it is an efficient straight or angle plow with wings or backdrag plow with significant containment and down pressure.
‍

The fifth function, wide angle plowing, can be achieved in 60 seconds or less by repositioning the wing cylinders on each side of the plow so the wings will only rotate back by 90 degrees. This extends the plow by 23 inches on each end for even greater capacity when straight and angle plowing. For example, an 8½-foot QuattroPlow with the wings in the wide-angle position will be 12 feet, 2 inches wide. Operators who seldom or never need backdragging containment can still boost their productivity with a QuattroPlow because they get a combination snowpusher and wide angle snowplow for maximum performance in wide open parking lots.
‍

SnowWolf also incorporated 35-degree-angle tips on the QuattroPlow’s wings to provide greater carrying capacity while minimizing windrows caused by trickling from the ends of the plow, regardless of the direction the machine is moving.
‍

SnowWolf President and Product Development Manager Jerry Holman said the QuattroPlow’s strength is in its simplicity. For example, a smart valve, which is a new type of hydraulic valve that SnowWolf designed and patented, gives operators complete control of the wings without removing their hands from the steering controls. When they angle the plow all the way to the right and hold for a few seconds, the smart valve shifts hydraulic fluid to the wing circuit and both wings move forward to the snowpusher position. When they angle all the way to the left and hold, the wings move backward to the wing plowing or backdragging positions. The directions can be switched according to the preference of the operator.

“In a skid steer, you’re handling multiple functions already – forward, reverse, turning, running the auxiliary circuit and boom lifting, lowering and tilting,” Jerry Holman said. “It’s inefficient to reach over to a switch box on the side of the cab to move the wings. The QuattroPlow eliminates that problem.”

In the backdrag position, the QuattroPlow carries significantly more snow than an angle plow alone. In addition, operators can effectively scrape and carry snow backward without changing the machine’s orientation. For example, rather than backdragging from the front of a garage in a condominium parking lot, going around to the other side of the snow, positioning the machine so it’s facing away from the garage door, then pushing it out into the street, an operator can do it all at once.

The 35-degree angle on the tips of the wings come into play in this scenario, as well. It allows operators to carry more snow backward for greater distances and with fewer trickles than with a straight plow alone. The angle also keeps the wings from scraping the machine or damaging its tires.

QuattroPlow’s wings backward to the backdrag position to create a reverse box pusher.

WolfWings are curved attachments for straight plows that provide maximum containment and snow rolling efficiency. A plow with WolfWings provides 43 percent more efficiency than a snowpusher, and 30 percent more productivity than a standard angle plow. Similarly, the QuattroPlow’s wings follow the contours of the moldboard and have a cutting edge on the bottom. The advantage of the QuattroPlow over WolfWings is that operators can use the wings when they need them for angle plowing, while also adding the functionality of a high-capacity snowpusher and backdrag plow.

The QuattroPlow is available in widths of 8½ to 12½ feet when the wings are in the snowpusher position. The snowplow is ideal for machines that weigh 6,000-14,000 lbs., such as skid steers, compact wheel loaders and tractors with loaders.