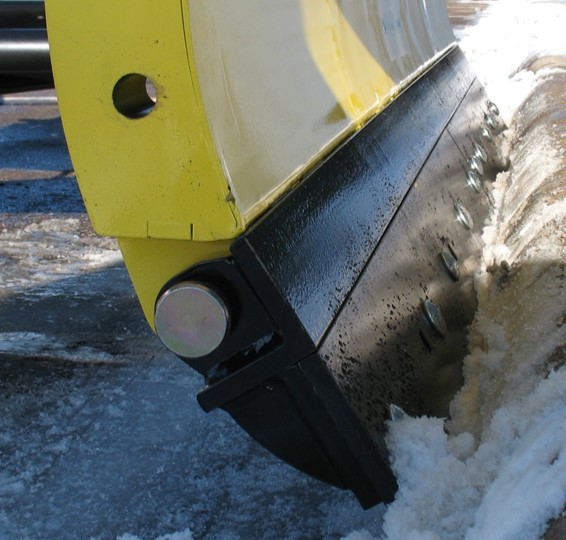 The Right Cutting Edge for Plowing or Pushing Snow

Steel, Rubber or Poly? That depends.

It’s 3 a.m. The snow removal contractor is in the driveway of a condominium complex. He’s already pulled the snow back from the front of the garaged doors and now it’s time to move all that snow to the far end. He lowers his pusher and starts moving forward.
‍

His steel cutting edge scrapes away the ice and hard-packed snow, and he’s getting the cleanest scrape possible. That’s good, right? Well…
‍

My advice to the contractor would be to keep his cell phone handy, because it won’t be long before the condo complex manager will be calling. The loud crunching, grinding and screeching sounds of the steel cutting edge on the asphalt is waking up his tenants. They’re not happy, she’s not happy.
‍

The example is a bit far-fetched, I know. It’s highly unlikely that a reputable snow removal contractor would ever go into a condo or apartment complex driveway with a steel cutting edge. It’s common sense.
‍

Steel is great for jobs like clearing huge box store parking lots. No worries about noise, and they provide the best scraping ability, hands down. That’s why steel is the most common choice for trip-edge or full-trip plows.
‍

But sometimes steel cutting edges are not always the best way to go, and other times they aren’t even an option.
‍

What’s best for you – steel, rubber or a plastic polymer cutting edge – depends on several factors, like initial investment, durability, pliability, application, surface sensitivity and contract stipulations. With those in mind, let’s take a look at the pros and cons of each.
‍

We’ll start with steel because that’s what’s on the majority of machines out there right now. And we might as well start with what is usually the first question: what’s it cost?
‍

The price for a steel cutting edge is less than polymer but much more than rubber. If low cost is the key factor for you, then steel isn’t the way to go.
‍

A steel cutting edge provides the absolute best scrape in most applications because it stays rigid and angled forward to effectively cut underneath hard pack or ice. Since you get a clean finish to start with, you won’t have to use as much salt or other ice melting product to totally clear the pavement. That means less time for you and less cost for either you or the guy who owns the surface.
‍

As far as product lifespan, a steel edge will typically last the longest of the three materials, depending on what type of surface you’re clearing. Granite chip, for example, is a hard, scratchy surface on many municipal roads that wears a cutting edge quickly, even steel. Gravel, cement, decorative cement or paving stones (what we call “pavers”) will all wear your cutting edge at different rates.
‍

Steel is not good for clearing sensitive surfaces like cement, decorative cement or pavers. The edge will scar the surface or leave metal scratches that, come springtime, will show up as streaks of rust.
‍

Parking ramps are in the same category. They have expansion joints and special surface finishes that could be damaged by the hard steel. Because of that, you’ll often see RFPs (Request for Proposal) that specifically preclude state steel cutting edges.
‍

Same thing with pavers, which are often used on residential driveways. Some higher-end commercial properties with paver driveways or parking areas, too. With pavers, scars aren’t the biggest worry. A steel edge could actually chip the stones, and if they aren’t perfectly level, you might even start popping some of the stones out.
‍

And, finally, to take you back to the crunching, grating and screeching sounds of steel-on-pavement in the condo complex, steel is just plain loud.
‍

If purchase price is your key determiner, then you should go with rubber. They’re cheap because they’re made with material that’s similar to conveyor-belts. You’ll have a cutting edge, but it won’t scrape very well. And for some applications, like pushing snow around a company’s storage facilities, that’s not very important, anyway.
‍

If you’re using a fixed plow, a rubber edge will provide you a measure of protection because the rubber folds back when it encounters ice or hard pack. Say you bump up against a manhole cover that’s a couple of inches above the surface. The rubber edge will just fold back and you’ll plow right over it. If you were using a steel edge in the same situation, you’d really feel it. You could even get injured.
‍

For the same reason, a rubber cutting edge is great for clearing sensitive surfaces. Instead of gouging, scraping or otherwise damaging the surface, it’s going to flex and give to accommodate the variations in the surface.
‍

Finally, a rubber edge is quieter than a steel edge, and even with all of the weight of a plow pushing down, you’re getting a smoother surface contact.
‍

Going back over the surface again is not an option. When you go over a surface with a rubber edge, there’s what I think of as a squeegeeing effect. The edge is going to slide over the ice and hard pack, making it harder with every pass.
‍

So, you’re either going to leave the snow, hard pack and ice there, or you’ll have to apply a lot more salt or ice melt. Depending on how the contract is structured, that’s either going to cost you or your client more money. Either way, it’s not good for you.
‍

The third option is not as hard as steel and not as soft as rubber:  plastic polymer. At SnowWolf, we call ours a Poly Soft Touch edge.
‍

Polymer cutting edges cost the most of the three options, but they’re beginning to edge out rubber as a viable replacement for steel due to several advantages.
‍

Polymer is rigid for effective scraping, but soft enough that you can still use it on sensitive surfaces. It doesn’t scrape quite as well as a steel edge, but it’s way better than rubber.
‍

The other thing about polymer is that, once it’s worn in, the flat cutting edge “self-lubricates” and the edge glides over the surface.
‍

Finally, even though it’s softer than steel, a polymer edge will last nearly as long (sometimes just as long), and definitely way longer than even softer rubber.
‍

The first knock against a polymer edge is that it’s the most expensive of the bunch. Like any purchase, you’ll have to weigh the benefits against that initial cost.
‍

You should always use a rubber cutting edge with a rigid plow because the flex will protect you if you a strike an obstacle. Most snow removal equipment companies won’t even put a steel edge on a rigid plow. It’s too dangerous.
‍

For trip-edge or full-trip plows, steel is the preferred cutting edge because of how well it scrapes. However, the hardness and rigidity that make steel edge scraping ability so good are exactly the reasons you should never use one on a sensitive surface.
‍

If you’re going to buy a trip-edge  or full-trip plow and you’re not sure what type of cutting edge should go with it, you’ll be in good shape if you ask yourself these three questions:
‍

Keep the pros and cons in mind, ask yourself these questions and you’ll be headed in the right direction. As always, if you have questions, give us a call.